Blame it on the Movies 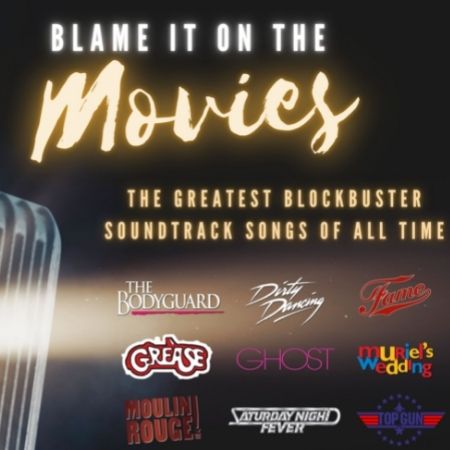 Popcorn in hand! Get ready to relive the greatest movie magic moments of all time in this show stopping music production that celebrates the biggest BLOCKBUSTER soundtracks and all their unforgettable tunes!

From the infectious Footloose to the Cash classics of Walk The Line... From the gorgeous music of Ghost to the toe tapping hits of ABBA featured in the iconic Australian comedy Muriel's wedding - BLAME IT ON THE MOVIES is THE show to see!

Featuring all the songs you know and love performed by Australia's finest musicians and vocalists! From Celine Dion's Oscar winning 'My Heart Will Go On' to Whitney Houston's breathtaking 'I Will Always Love You', there's all the

This show is fun, fabulous and full of energy and if these iconic songs get stuck in your head.... well just BLAME IT ON THE MOVIES!

ABOUT THE MELBOURNE CAST

Euan Doidge is originally from South Australia and in 2011 moved to Melbourne and completed the Fulltime Music Theatre course at Patrick Studios Australia. Euan’s Theatre credits include Anything Goes (The Production Company) 2011, The Producers (The Production Company) 2012, Paul San Marco in the Australian cast of A Chorus Line (TML Enterprises) 2012 for which he was the youngest ever nominee for the Helpmann Award for Best Actor in a Supporting Role in a Musical.

He then played the role of Tony Manero in GFO’s Saturday Night Fever in 2019. At the end of 2020 he played the role of Lewis and understudied the lead role of Pippin in Pippin The Musical (GFO) and is now currently performing in Charlie and The Chocolate Factory (QPAC in association with Crossroads live).

Cassie McIvor is an International Vocalist from Melbourne, Australia.

A BAPA grad, Cassie started working overseas as Elphaba in the Universal Studios production of Wicked. With a taste for travel she followed the work and joined Cabaret and Circus shows around the globe including Franco Dragone's (Cirque Du Soleil) show Taboo in Macau and Grand Review Varieté at the Friedrichsbau in Germany.

In London she sang with World and Olympic Ice Skating Champions in Sochi Ice Symphony in Kensington Gardens for the 2012 Olympic Games. She has performed shows at Café de Paris in London, Birdland in NYC, City of Dreams Casino, MGM Grand and headlined the Grand Opening of the Studio City Arena in Macau.

In Tokyo she originated the role of the Diva in Disney's premier show Song of Mirage whilst performing her own jazz shows across Japan. And between these contracts Cassie was a Guest Artist on board Forbes No.1 Luxury Liner, The Europa 2 for HapagLloyd Cruise Lines.

As the pandemic hit Cassie returned to Australia and used her time to complete a course with Berklee College of Music in Songwriting & Music Production.

And most recently she appeared on Channel 7’s The Voice Australia.

No performance available for Blame it on the Movies